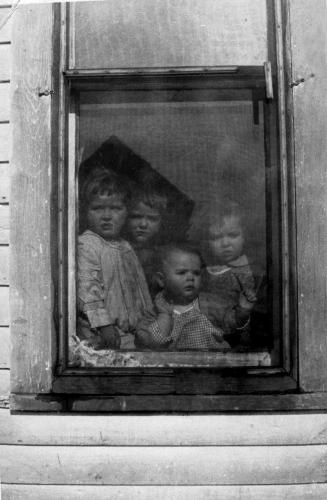 “Migrant Mother” (1936) by Dorothea Lange is probably the most well recognized photo taken by the Farm Security Administration photographers that symbolizes the Great Depression. Several hundred thousand images both in black and white and in color were shot during this period.

Some of the most renowned photographers in addition to Lange were Walker Evans, Arthur Rothstein, Russell Lee, John Vachon, Carl Mydens, Marion Post Walcott, Gordon Parks and Jack Delano. The collection of photos taken by the FSA stands unmatched compared to all other photo essays.

Talented as these photographers were, I would argue that they could not capture all of the classic images of the Great Depression that we have come to admire. Clearly, there were millions of photos shot by amateurs which have not been published.

Children in a Window is my latest attempt to bring such images to public attention. It is an image that I am most proud of as it is symbolic of the Great Depression in human terms through the eyes of children.