The flooding in Pakistan during August and September 2010 were on a biblical scale. Muhammad Ramzan was there to capture images of the effect of the flooding on the local people in particular the children. His photo essay demonstrates the disaster on a humanitarian level without regard to politics.

Ramzan’s essay illustrates the extent to which the Pakistani people helped each other to survive. The Pakistani military was key in getting people pulled from the flood waters and providing food and shelter. What is unique concerning this flooding is that it covered such a wide area affecting millions of people. The flood was not isolated to a single city or town but spread through a large part of Pakistan. 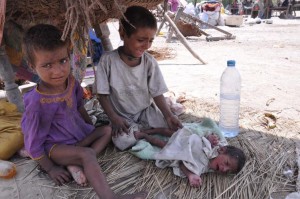 Sukkur, Pakistan – August 23, 2010: Family seeks the safety from the flooding under a bypass. The family sits under the shadow of a traditional bed (charpal) to protect themselves from direct sunlight. 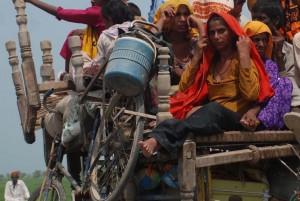