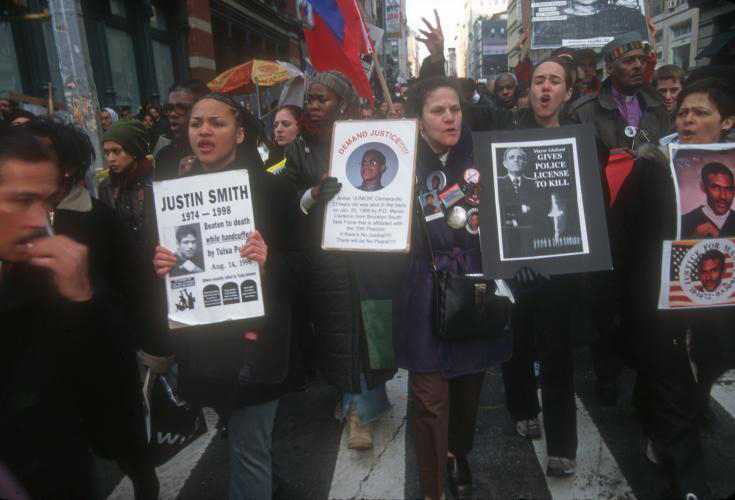 “…the right of the people peaceably to assemble, and to petition the Government for a redress of grievances.”  These words are enshrined in the First Amendment to the Constitution. The operative word, of course, is “peaceably”.

I think that 2014 will be remembered as the “Year of the Protest”, and demonstrations following the deaths of Michael Brown and Eric Garner being the cases in point. To understand the outrage requires a history lesson for the younger generation. Deep-rooted feelings of abuse during our country’s period of slavery and later under Jim Crow laws go to the heart of the matter. Following the Civil War in some communities the local police departments were populated by members of the Ku Klux Klan. As a result, police came to be mistrusted and feared in the affected communities.

The role of the police is for the protection of society as a whole from those who would otherwise take advantage and commit crimes. Without a police force individuals would be forced to rely on their own devices, and thereby arm themselves to protect their lives and property. A society that believes in the rule of law could not exist without a police force. Could abuses within a police force contribute to their own destructive behavior at times? Yes. As human beings we are not perfect. Is the jury system flawed at times? Yes. We are talking here about the greater good. This is exactly the point. We have to believe that more times than not the right decisions will be made, so we accept the judgment of a police officer and likewise a jury.

The protests over the police shooting of Amadou Diallo raised even more serious issues than the deaths of Brown and Garner. But those protests were relatively “peaceable”. There was no looting. There was no burning of property. There was no blocking of streets, highways and bridges to traffic. In different times under different circumstances looters could be shot on sight.

Something very different is happening at this time. It would seem that government officials have given approval to “non-peaceable” protests in the belief that this is necessary, in some way, to preserve the public good. I would argue that if left unchecked protests can create a life of their own leading to general strikes, coups and revolutions. Why do you think that countries like Iran and China stop protests before they get out of hand? If you prefer a historical example, the French Revolution took on a life of its own morphing into different phases and ultimately leading to dictatorship under Napoleon. This history lesson is not lost on governments that seek to retain power and not conduct free elections.