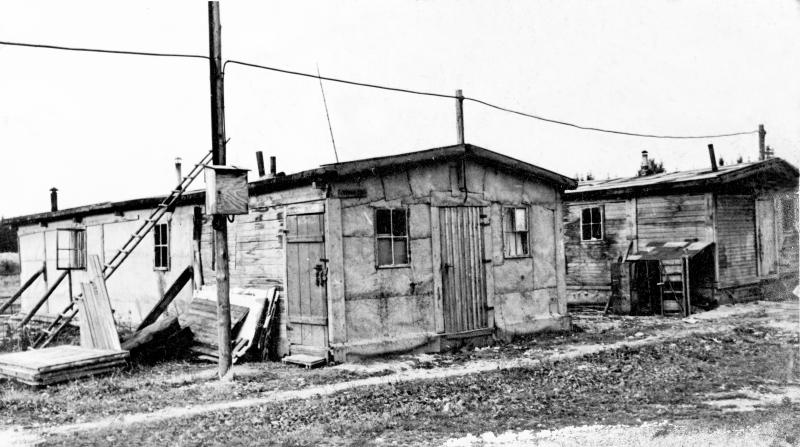 Political and economic decisions made during the 1920s led to the Great Depression.  While much has been documented about New Deal programs to lessen the suffering during the Dust Bowl period, less has been posted on this blog about the period from the stock market crash until the inauguration of Franklin Roosevelt.  Until now! 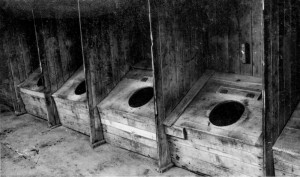 The latrine inside an agricultural migrant worker camp (1931).

The Hoover administration took the position that free market corrections would return the nation to prosperity.  Eventually.  In the meantime the good life of the 1920s, which many enjoyed, became a distant memory.  Work camps were established for migrant workers.  There was a need for agricultural workers to feed the nation.  For the most part the workers housed at these camps were not illegal, undocumented immigrants but rather displaced American citizens who were down on their luck which is a nice way to say their lack of high wage skills led to their condition.  In addition to work camps, men traveled the country looking for work.  Families were broken up and some men found shelter in “Hoovervilles” which were collections of ramshackle shacks which sprang up across the nation.  Our collection includes examples in Seattle and Ohio.

Lacking strong leadership from the Federal Government some people sought solutions elsewhere.  Particularly striking is an image of Communist sympathizers on the march in Detroit on March 7, 1932.  We have entitled this blog “Unintended Consequences” as that is the term used to describe a course of events which have not been foreseen.  As in chess, it is perhaps difficult to plan many moves ahead, but in the real world the consequences can be disastrous.  Just to give one example of this concept would be an examination of the French Revolution.  Liberty, Equality, Fraternity to be sure, but this attempt to overthrow the monarchy led to the “Reign of Terror” and the eventual rule of Napoleon.  So it is not certain that once a watershed event is put into motion what the results of that action will be.  Without the benefit of hindsight it is critical to make informed decisions. 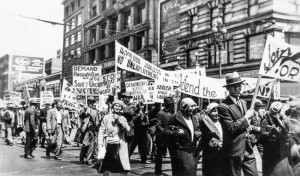 A march and demonstration of Communist sympathizers in Detroit (1932).