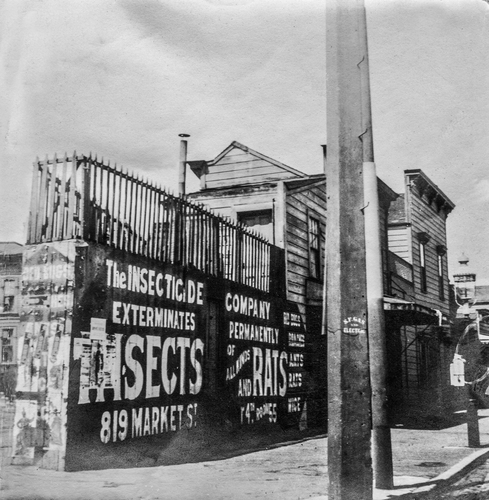 One of the most respected photographers of the Farm Security Administration during the 1930s was Walker Evans.  Evans’ subjects were varied, but he is perhaps best well known for his images of advertising signs. His work stands out from some of his contemporaries such as Arthur Rothstein, Dorothea Lange, Russell Lee, John Vachon, Marion Post Wolcott and others because of the uniqueness of his style.

It is said that imitation is the sincerest form of flattery. In fact, many creative works are new interpretations or improvement on previous designs. The Romans copied Greek architecture and their gods. Inventions, such as the steam engine, show a centuries long development of the concept until its use as a practical form of power. Is it not possible that Evans’ style was influenced by his knowledge of previous similar work? I think that the argument is valid. The lead photo presented here we call “The Exterminators”.  Taken in San Francisco c.1910, the great earthquake of 1906 undoubtedly disturbed the rodent population in the city to a large extent. The pest control field must have had a booming period as this advertising sign for a Market Street business depicts. 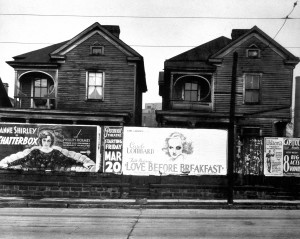 Second in importance to “Love Before Breakfast” in Evans’ collection of advertising photos is the “Downie Bros. Circus” taken in Lynchburg, Virginia (April 23, 1936). These powerful images motivate us to search out previously unknown works such as our photo called “The Exterminators” for presentation. It is our hope that future generations of photographers will continue this documentary specialty.