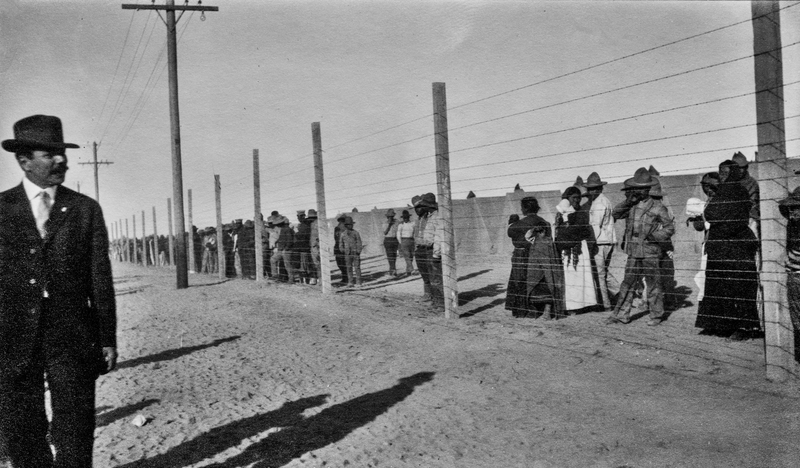 Sometimes a little gift just falls into your lap. We present this recent addition to our Immigration collection: “U.S. – Mexico Border“; c.1913. Migrant workers crossing the U.S.- Mexican border have been entering the U.S. for decades to do agricultural work which is seasonal and then return to Mexico. They have been employed in southern California, Texas, Florida and here on Long Island working in the potato fields before they were converted to vineyards. Many other states have also employed these migrant workers.

Our research indicates that our photo was taken c.1913, and that calls into question are some or all of these individuals seeking asylum from the Mexican Revolution (1910-1920)? I would have to argue that some people in the line were seeking safety from the carnage of the Revolution particularly because many of the battles were fought along our border with Mexico. A similar situation to that which we face today where individuals are threatened by gangs and drug cartels.

My ancestors did not arrive in this country as first class passengers. They were escaping from persecution in Europe in the late 1800s. Some entered through Ellis Island while others made their way here through Canada. They came on ships powered by wind with sails as well as steam power. Some changed their last names and claimed that they were emigrating from countries from which they did not live. They did what they had to do to get to this land of opportunity. Refugees, and that is what these people are at the border today, cannot simply wait in Central America only to be slaughtered. They are not vermin nor are they invaders. Those terms were used in the 1930s to stoke fear into a population. Those tactics tried to demonize certain groups of people into what we call the “Other”. It was done right here in the U.S. regarding Native Americans so as to somehow make them subhuman. The Germans have a word for it, Ūntermenschen. It made the killing (Holocaust) so much easier if you believe that you’re not killing people just vermin. When propaganda demonizes groups into subhumans the ultimate result is genocide.

Something else to keep in mind:

“First they came for the Socialists, and I did not speak out–

Because I was not a Socialist.

Then they came for the Trade Unionists, and I did not speak out–

Because I was not a Trade Unionist.

Then they came for the Jews, and I did not speak out–

Because I was not a Jew

Then they came for me–and there was no one left to speak for me.”   –Martin Niemõller