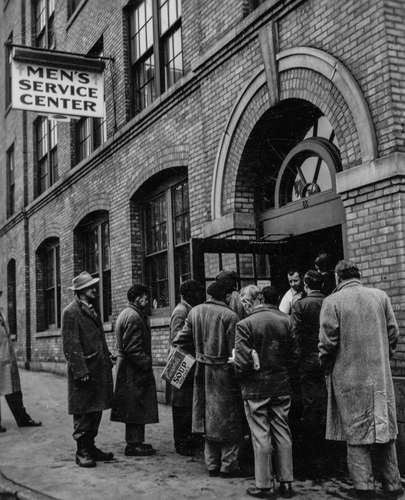 A rare image deserves special recognition. “The Soup Kitchen”; U. S. c.1931. Possibly run by the Capuchin Services Center in Detroit. Note the cross on the sign, and note the box of Campbell’s soup carried by one of the men. 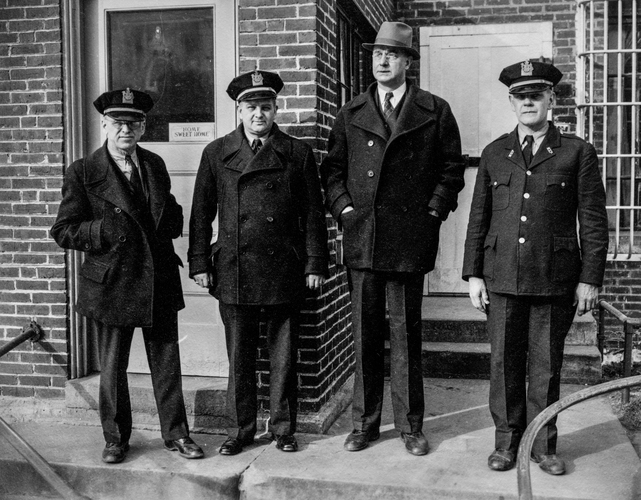 Another case of art imitating life. When we first saw this image the significance for us at DPI was instantaneous. One of the most acclaimed films is “The Shawshank Redemption” (1994) starring Tim Robbins as Andy Dufresne and Morgan Freeman as “Red”.  Andy was sent to this fictional Shawshank prison in Maine in 1947. The photo in this blog was also taken in Maine at the Thomaston State Prison in 1940. The image shows the warden and several guards. The warden seems to even bear an uncanny resemblance to warden Norton in the film albeit a bit taller. It does make you wonder.

Note the “Home, Sweet, Home” sign. “His judgment cometh and that right soon”. An image almost too good to be true.

No, this blog is not about some new freeway in Los Angeles. For those of you who have been wondering what has been going on at DPI here is the explanation. A life-changing event. Mine.

During the last 10 days of September and early October I had been experiencing bloating in my stomach and heart palpitations almost continuously. Finally,  I made the connection and drove myself at 3 A. M. on the morning of October 3 to the Good Samaritan Hospital Medical Center in West Islip, N. Y. My journey led me from Admissions to Triage, to the Emergency Room, then for a CT scan, thence to the Cath Lab and eventually to the Operating Room during the afternoon of October 4. It had been determined that I needed a triple bypass operation. The surgeon told me before the operation that there was about a 1% chance that I would not survive. I told him that I believed there was a 100% chance that I would not survive very long without the surgery. At first he said that it would only be a double bypass as he was not sure if he could get to the other artery. I told him that as long as he was in there to do all three as I certainly did not want to go back in again.

Following the operation I was unconscious for two days with tubes coming out of me from just about everywhere. When I awoke I was so weak that I could not even place the straw from the cup of water at my bedside to my mouth without great difficulty. I think that I was more dead than alive. To say that the doctors and nurses at Good Samaritan saved my life would be a gross understatement. I could not have received better care than if I were the President of the United States. I left the hospital on October 10 and have been recovering at home with the love and help of my family. Recovery is slow but steady. To try and describe the event is somewhat challenging. Imagine getting hit in the chest with a baseball bat and getting spiked in the leg at the same time. The operation involves removing some veins from the leg and grafting them onto heart arteries. Sort of like Tommy John surgery but a lot more delicate and serious. Fortunately for me I had the best surgeon available to work on me just by chance.

It’s a whole new world. Believe me. Medications that I never had to take before with their side effects. Weight loss of about 17 pounds and counting. That is actually good news as I had difficulty over the years in trying to lose weight. I would not suggest that anyone go through this procedure just to lose weight, but it does work. I feel an obligation to pass along my experience. This is something that you never, ever, want to go through. Anyone who would return to a lifestyle inconsistent with maintaining a healthy heart following a bypass operation would be a fool in my opinion. After all there are more arteries connected to the heart so it’s conceivable that a second operation might be necessary. You need to think very carefully about how you live your life following open heart surgery.

Recovery is measured in weeks in the beginning and then in months with full recovery projected for about a year’s time. I was well enough to vote on Election Day. I told my family that I intended to vote even if I had to be brought in on a stretcher. It never got to that point. From my knowledge of the recovery process I would say that I am on track or slightly ahead of schedule. I think that by next week I will be driving once again.

The good news for followers of DPI is that while it has been difficult to make new postings until now, we have been able to continue to acquire some of the best photojournalism and documentary images ever presented at DPI. I hope that in some way these new images will compensate for our silence during the last six weeks.