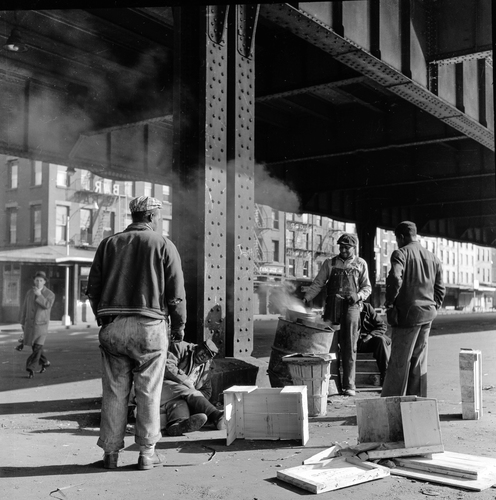 The quote, of course, is from Lincoln’s second inaugural address, and he was referring to the catastrophe of the Civil War and the need for reconciliation. We are using his words to introduce the theme of charities which are available to us in terms of making a donation. When I began to try and compile a list of those charities and organizations to which I have contributed I was stunned at the length of the list. As of this writing I am sure that the list is incomplete. Not only that but there are a number of worthy organizations to which I have not as yet contributed, but I hope to at a future date. My donations are small, but it is important to me to be part of the solution not simply a bystander. I sleep better at night this way.

Our lead photo is “Homeless–West Side Highway“, Manhattan, New York City c.1960. We have a growing collection concerning the homeless, and this is a problem that most of us encounter at one time or another, i. e. a homeless person asking for a handout. The good thing about donating money to a homeless person is that you can be 100% certain that he/she will receive all of the proceeds. You cannot control how they spend the donation, but at least there is no middleman to contend with.

ORGANIZATIONS TO WHICH I NO LONGER CONTRIBUTE:

Deductions to UFT and NYSUT are not included as they are more in the category of union dues though not mandatory. Still, those deductions reduce disposable income.