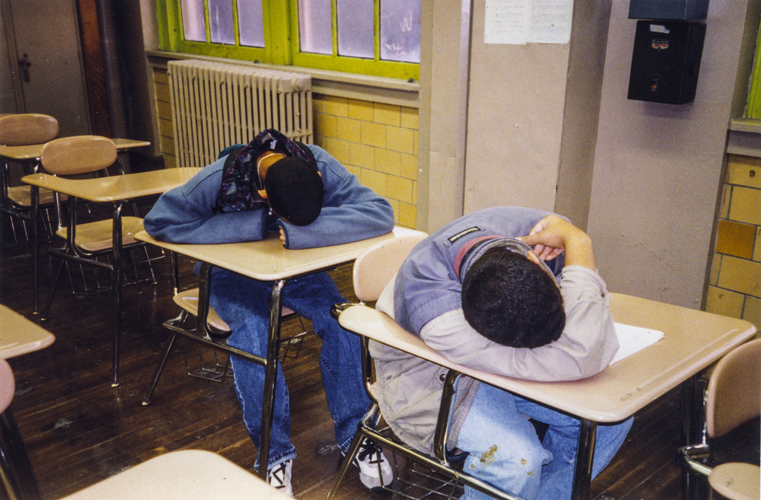 Enter the real world of teaching. Welcome to a New York City inner city high school classroom. I know. I was there. You could throw billions of dollars at what you make believe is the problem and never come close to solving it. What you see in this photo is not because the teacher was unqualified or lacked preparation for the lesson. Teachers do take all of the blame because they are easy targets. One does not enter a career in teaching for the money. If you don’t care about the kids and what you can give to them you don’t belong teaching.

This is a societal problem. Take the two students shown in this photo and multiply them by millions for that is the dimension of the problem. Why are their heads down you ask? I will give you a list of the real issues at hand, and this list is not inclusive. Lack of a stable family life. Parents missing, dead, incarcerated, suffering with AIDS. Violence. Drive-by shootings. Every year we would lose some students as victims of violence. Family members killed/beaten. Gang violence to include: Latin Kings, Bloods Crips, Los Ńetes (sic) and La Familia. Fortunately MS-13 was not a factor in this school at that time. Drugs. Pregnancy. Foster parents. Extortion. Fights that were arranged in basements on weekends for money. Colors. Gang colors/beads. A simple perceived disrespect.

Why do you suppose these young people were seen always listen to music on iPods at that time? Sure they like music, but the real reason is not to make eye contact with a potential aggressor. Same reason why they will not stop to pick up a quarter that they themselves may have just dropped. Because there might be a bigger and stronger aggressor watching them and a fight would ensue over the quarter.

Weapons and cell phones not allowed in school. Frankly, I would not want to walk the streets to and from school without a cell phone in case of emergency. And what is the school administration most concerned about? Wearing hats in classroom. The U.S. schools are based on a European model where it is poor etiquette for a gentleman to wear a hat in a public building. Frankly speaking what is more important what is on a kid’s head or what is in a kid’s head? Students in this school did not have ancestors who came from Europe. A cultural issue perhaps similar to forcing American Indians to abandon their culture and language as well as more recent apartheid issues in South Africa.

I once had a female student from El Salvador in my class. Sixth row second seat as I recall. During the lesson she would be seen reading a novel that I estimated at between 500-600 pages. It would seem to be disrespectful except that on the first test that I gave to the class she scored a 95%. She was also probably undocumented. I told her that she could keep reading the novel. As a matter of fact I was able to place her in an honors class the next term and she blew those kids away too. Immigration is a strength for the United States not a weakness.