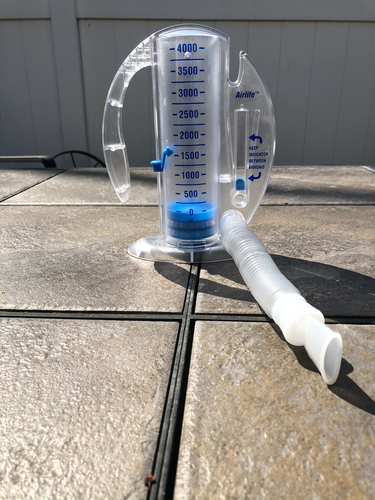 It has now been about five weeks since I have ventured outside my home. Retrieving the newspapers delivered on my front lawn, going to the mailbox and taking out the trash have been the extent of my movements outdoors. This morning I awoke to the sound of a lawnmower. Our lawn service has returned! I had not fertilized our lawn for fear that the service would not show up this year as they are based in one of the hardest hit areas of Long Island. Bienvenidos!

What keeps me sane these days of being under virtual house arrest minus the ankle monitor is my past experience in 2018 as I underwent triple bypass heart surgery. I was unconscious for two days following the surgery after having been placed on a ventilator. “The Spirometer“, shown in this blog, is a device that the nurses give to you in order to strengthen your lung capacity. The object of this game is to blow into the spirometer so as to keep the little blue ball hovering in the middle of the tube on the right between the arrows as long as possible. There is this gauge to the left, and it seemed to me that if I could work this device properly it should read “1500” for that is where the indicator arrow was set. I was never able to get beyond 1200 even after several months of trying. I found it difficult to use and tiring. Also depressing. Nurses came to my house for about six weeks imploring me to use the device. Finally I discovered a preferred way of strengthening one’s lungs that had not been told to me or had appeared in any of the literature given to me upon discharge from the hospital. Singing! For me that was the key. But the spirometer remains a symbol for me of my days in recovery. I have no desire to ever be attached to a ventilator again, and I know that if I play fast and loose with social distancing it could happen once again. I have always believed that you learn more from your failures than your successes. Believe me, you never want to be placed on a ventilator.