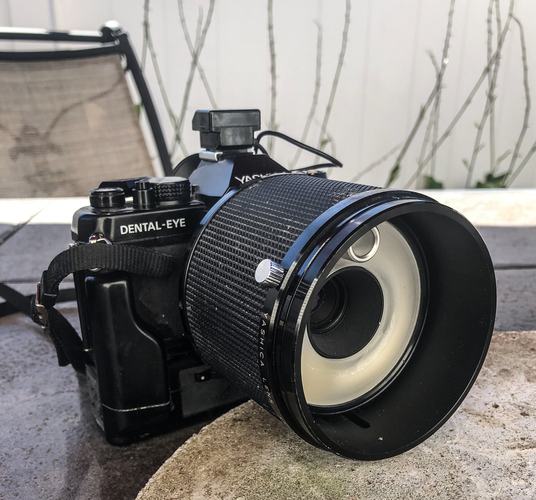 In a little used far corner of my home I spied a black, hard camera case. I remembered that it had some photo equipment in it, but I could not recall exactly what it was. From the accumulation of dust on the case I estimated that it had laid untouched for 10 to 15 years. What i found when I opened it was a gem! A gem!

This is the Yashica Dental-Eye 35 mm film camera. Not so much a camera as it is a modified Yashica FX-3 used for medical and scientific use. It does not focus to infinity. You can find one occasionally on Ebay for around $!00.00. I had purchased it at a yard sale for no more than $10.00 and probably less. The seller must have realized that it had very limited uses and could not be used as a normal camera, but only for specialized macro photography such as dentistry. A dentist would take photos of a patient’s mouth before and after procedures and most likely during as well. I have the original version. All versions have a fixed lens. Mine has the Yashica 55mm f/4. It also comes with a tripod socket which versions II and II do not have. The camera that I have dates from the late 1980s. Reproduction ratios are from 1:10 to 1:1. There are no shutter speed settings nor aperture settings. The camera does that automatically. ISO settings are from 64 to 1600. Mine uses 4 AA batteries. I had feared that the contacts had been destroyed due to battery leakage, but they were fine. The later versions use very expensive batteries. Versions II and III also come with a 100mm lens so as to keep the flash further from the patient as there must have been complaints. My version must have a wider field of focus at 55mm which is better for what use I have in mind for this camera. The flash sync is 1/250 second. And now for the best part.

The flash. A ringflash! It is powered internally from the AA batteries. The Nikon Medical Nikkor 200 mm F/5.6 and Nikon 120 mm Medical F/4 both need external sources of power. That pretty much limits outdoor use especially for photojournalism and documentary photography. The Dental-Eye has clear applications for advertising and product photography. Now I have to think out of the box as to how to apply its features for our uses at DPI. I’ll bet the bokeh must be great. Sure there are other cameras and lenses that have macro capabilities, but do they have a built-in ringflash that syncs to 1/250 of a second? I have some ideas in mind as to how to incorporate macro photography into photojournalism. I’ll be working on them.