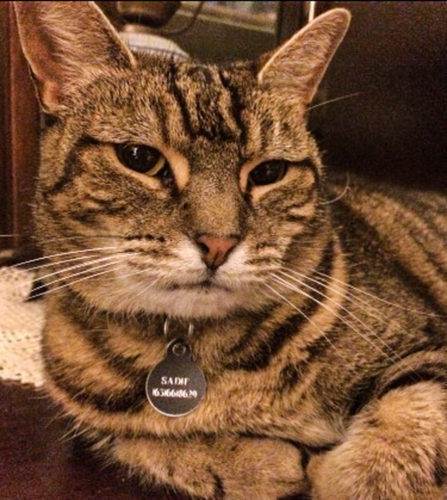 It was the third week of June 2003, and as I was sitting on my patio this little ball of fur came up behind me. I picked her up and she fell asleep in my arms. For this kitten I think it was love at first sight. I learned years later that she had become an orphan. Her dying mother had dropped her off with her sibling brother at our neighbor’s house across the street. This kitten decided to seek a home elsewhere and found her way to us.

We did not take her in right away. By October she had learned to climb up on our roof and cling to a window screen. After she did this three times we took her in. Sadie was a brown and black short hair tabby. In the Spring when I was mowing the lawn she would park herself under a nearby tree on the lawn for shade. I began to think that she had it all figured out. People are the idiots for working and so forth. Sadie never scratched us or damaged anything in our home. For the first 15 years of her life she would go to the door so that we would know that she had to relieve herself by going outside. When finished she would scratch on the storm door and we would know that she wanted to come back in. Once I swear that she went to the front of our house and rang the bell. Once. It was a short sound. It could not have come from elsewhere. Smart cat.

Sadie shared our lives in good times and bad. She was there through a death in the family, sicknesses, hospitalizations and so forth. But she also celebrated good times with us, birthdays and anniversaries. When I came home with my car she would come out on the lawn to greet me. She knew my car. When we came home with groceries she would come out to inspect. Too bad she could not help carry in some groceries. I guess that would have been asking for too much. If she were in the house when I entered she would come to the front door or sit on the top of the steps and watch. It really was her house. We just lived with her.

As you pass through life you bear witness to numerous losses of relatives and friends. Each of them leaves a mark upon your soul that never goes away. I never thought that the loss of a cat would have a somewhat similar effect. I know now why some people are so upset at the loss of a pet. Sadie was always there. Always. I find myself looking at her usual resting places in our home and I miss her. As she was an orphan and found me I had always felt a moral obligation to care for her. We didn’t buy her at a pet shop. For some reason this cat was preordained to come and live with us. She was the best. She was family. Sadie lived until 17 1/2 years.