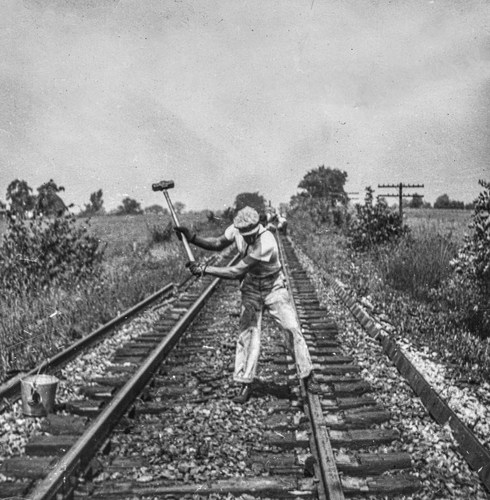 It was the sledgehammer that grabbed our attention. “John Henry Redux“; Ohio c.1928. The folk hero and the song, “John Henry was a Steel Driving Man” are a part of Americana. Our John Henry worked with a sledgehammer as did the folk hero but in a different occupation. He was not competing against a steam driven drill. What is a bit confusing in the photo is the angle at which he is swinging the sledgehammer. It seems to be at the wrong angle to drive in spikes, and if used to move a rail tie surely it would destroy the tie. The rails can shift over time, and today they would not be straightened using a sledgehammer there are machines made for that purpose. In this railroad worker’s time the sledgehammer was the tool of choice.