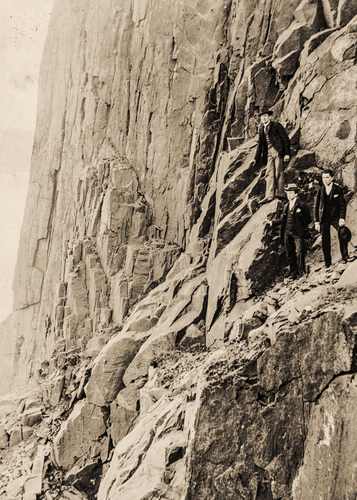 Am I living my life in part through Hollywood? Perhaps. But we go to the movies to escape our daily life for a little while and imagine being somewhere else in time and place. If you have not seen the movie “Point Break 2015” then this blog will be meaningless to you. So your assignment for understanding and commenting on this blog is to watch “Point Break 2015”. The film deals with the subject of extreme sports ordeals which can and do end in death in the attempts.

When we first saw the lead image for this blog we instantly made a connection to the film. Could these three men standing on the cliff face be base jumpers? Base jumping would be the second ordeal – “Birth of Sky”. Not likely, as I do not see any parachutes which they would be carrying. How about the fifth ordeal – “Life of Wind”? Again, impossible as there is an absence of wingsuits. So we are left with more realistic possibilities. My first thoughts were that the men we overseeing construction of rail lines through the Sierra Nevadas in California, but the cliffs do not match the California topography. Perhaps they were viewing the construction of the Panama Canal. Their clothing would appear to be a match to the time period, but again the cliffs are not a spot on match for the Canal Zone. It was only when we received the photo that accompanying documentation settled the issue. Such documentation is not always present. Give up? See the link below for the answer, and while not as exciting as Ozaki 8 at least it makes perfect sense.

We’re strong. We can take it. Just look at the Ukrainians to understand the meaning of sacrifice. 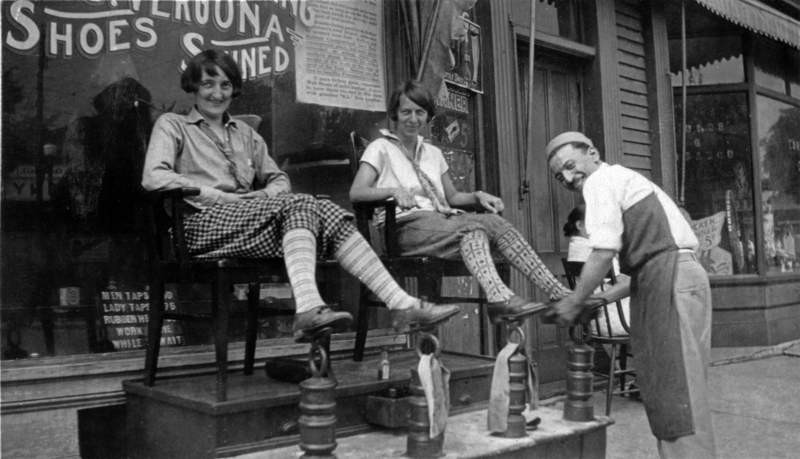 I fully understand supply chain problems, but shoelaces are another matter. Sneaker laces too. Recently, I attempted to purchase sneaker laces in a nation-wide pharmacy as I have done for decades. Finding none on the shelf I went to one of their competitors and was told we don’t carry them any more. Yesterday, I located a pair (not really what I was looking for) in Walmart and so I grabbed them. Does one have to search online for shoelaces these days? It’s getting a bit ridiculous I think. “Shoe Shine Man“; Massachusetts c.1925 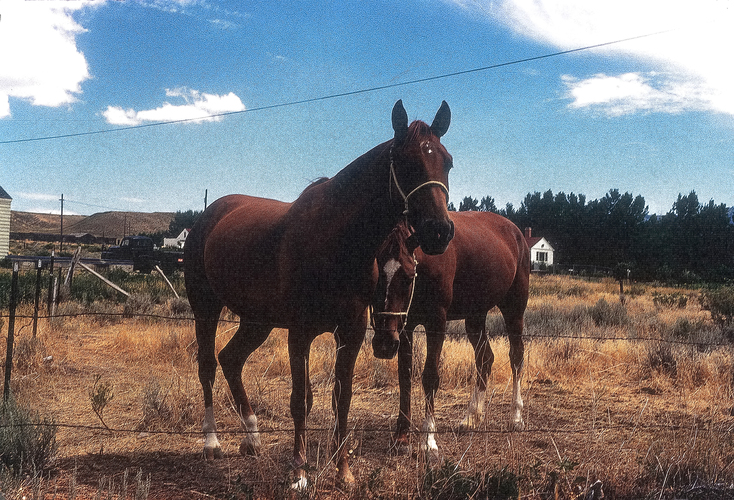 1:59.40! That was the winning time for Secretariat in the 1973 Kentucky Derby. If and when Rich Strike can equal or beat that time I will take my hat off to him. Still, it was an amazing accomplishment. Secretariat was a very special horse and we salute his career in “Secretariat Redux”; Wyoming (July 19, 1961). Of course Secretariat was not born until 9 years later and the markings don’t match. Maybe this is Stewball ! 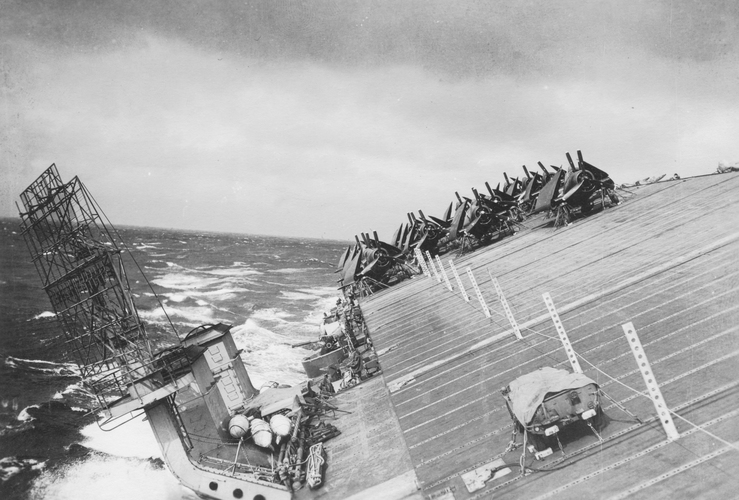 Navy people help us out on this. We believe – we believe that this photo dates from 1945. Hellcat fighters are seen lashed to the deck of an aircraft carrier during a storm. Most probably during a typhoon off the coast of Okinawa during the Battle of Okinawa. That is our assessment with a high degree of probability. The remaining question is to identify the carrier. Thirty-nine carriers took part in the invasion, 35 American and 4 British. We do not conclude that the photo shows the deck of one of the British carriers. Of the 39 total only 19 were assigned Hellcats. Other aircraft included Avengers and Corsairs. We further argue that the photo does not show one of the fleet carriers, the Enterprise, Yorktown or Hornet. that leaves us with 15 possible carriers, the support carriers. On some of these ships the superstructure was toward the bow not amidship, and we eliminated those from consideration. All we can say is that we are looking at the deck of one of the support carriers during a typhoon. If you really want to hazard a guess as to which carrier this is try the USS Santee.

“Hellcats“; in the Pacific off the coast of Okinawa (April 1945)