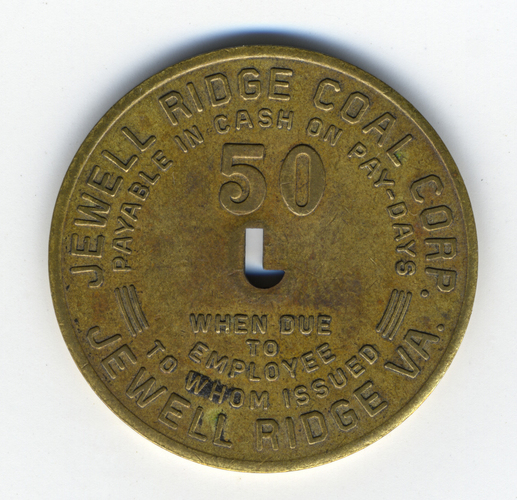 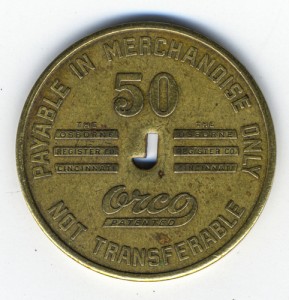 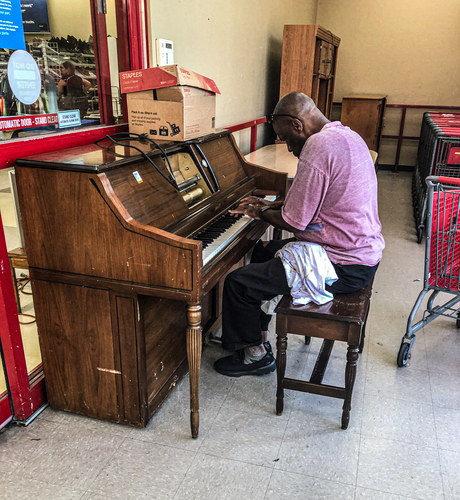 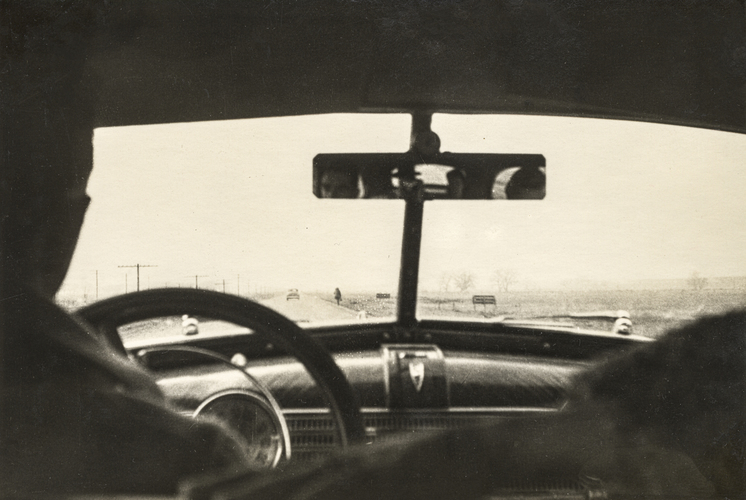 I would imagine that this photo does not look like much to most of you but not to me. Such a simple concept to shoot from the rear seat of an automobile. Most importantly a photo needs to tell a story and I believe that this one does exactly that. When a photo has multiple points of interest it becomes vastly more powerful. In such photos the human eye unconsciously scans the photo looking to make sense of it. What is going on here? Most photos have a weakly defined point of interest or simply one strong point. Not many have more than one, and this photo has a number of such points. Where to look first? Is it the woman walking down the side of the road? The road sign? The dashboard emblem? The man in the fedora in the back seat? His female companion? The driver? The telephone poles? So many points of interest. The eye and brain try to make sense of it all. We are looking 180 degrees behind in the rear view mirror and simultaneously 180 degrees ahead. Our assessment is that this is a 1939 Buick 5 window business coupe. We also believe that the man in the back seat taking the photo is using an Argus camera. I know this is really a stretch, but after viewing tens of thousands of photos over many years we are able to make such assessments. 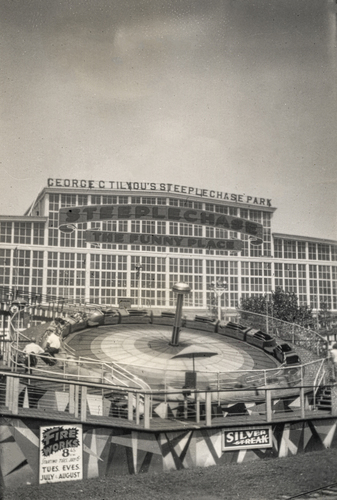 I have first hand memories of George C. Tilyou’s Steeplechase Park. As a young man I remember a day’s outing at Steeplechase with my friends. The original Steeplechase had burned down decades earlier. The main attraction for me was the electric horse race. Six carousel horses mounted on rails, the bell went off and the race began. Two riders to each horse. The race was fixed. The horse on the inside rail of the track won every time. All was not well on this trip. The giant sliding pond! Approximately 4 or 5 stories high it reached near the roof of the building as I recall. You were supposed to push off and ride the slide to the bottom. As I pushed off I instinctively put my arms out to slow my decent only to burn the skin off my left elbow. The infection lasted a several weeks. We also took a ride on the Bobsled which was not at Steeplechase, but was a famous attraction at Coney Island. The result was vomiting for the next hour after the conclusion of the ride. The Wonder Wheel (ferris wheel) proved to be mild by comparison. I was not about to try my luck on the parachute jump. So ended my fun day at Steeplechase Park and Coney Island.

See our blog for July 8, 2020. We used to have a cave cricket problem, but the varmints seemed to have moved on to darker pastures. Perhaps they have a life cycle similar to cicadas so they might return in another 17 years. Maybe my homemade cricket traps killed ’em all, but I doubt that. For the last several months our home has been cricket free. I had decided to modify my original solution patterned after the “sticky bomb” used in the film Saving Private Ryan. Placing three strips of duct tape inside a discarded tissue box proved to be the ideal final resting place for the crickets. Instead of a roach motel I created a cricket motel. You can check in but you can never leave. Kudos to the Eagles and Hotel California. For nearly two years I dutifully replaced trap after trap as it became filled with the night’s catch usually 20 or more. Hundreds if not thousands of crickets had taken up residence in our crawl space. Gone but not forgotten. May they never return. We have decided not to post photos of the traps and their catch as the images might be too disturbing for young viewers. 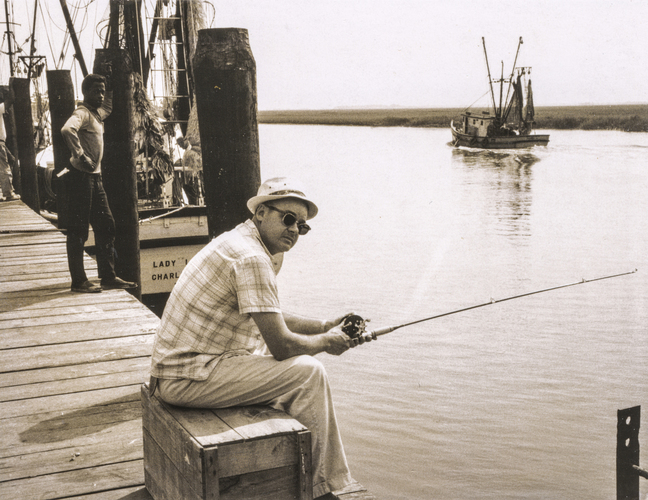 This photo is for all shrimp lovers. Unedited and in the original sepia is “Shrimp Boats at Charleston“; South Carolina c.1948. The Lady Luck is seen at dockside while another shrimp boat is outward bound. Oh, yes, and then there is the fisherman. The more you look the more you see. Man in the background standing on the dock and a worker on a boat in the far background with the netting. All in all just a wonderful moment for anyone who loves shrimp. 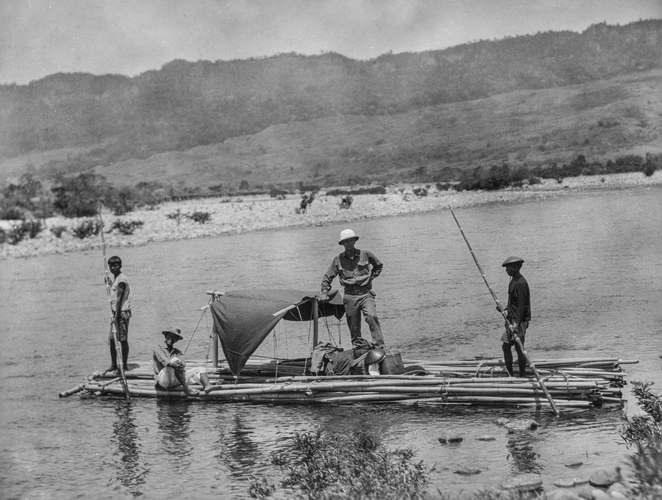 Two explorers on a journey into the “Heart of Darkness”, not likely. Adventurers maybe. They do not seem to have enough provisions on board for a long trip. In most cases there are some clues hidden in plain sight that help us to identify time and location. This photo presents some challenges. We date the photo to approximately 1923. But, location…location…location? The raft is made of bamboo. That narrows things to the tropic areas of the earth as they are in common use at that latitude virtually worldwide. We assess that these adventurers are Brits. Still, if you examine the extent of the British Empire in 1923 the task is quite difficult. This map shows the historic extent of the British Empire over time. 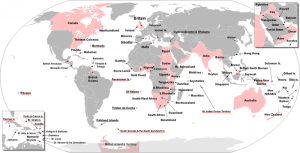 Using the process of elimination our assessment is that the location is the state of Kerala in India. Tours are still given today using bamboo rafts in Kerala.