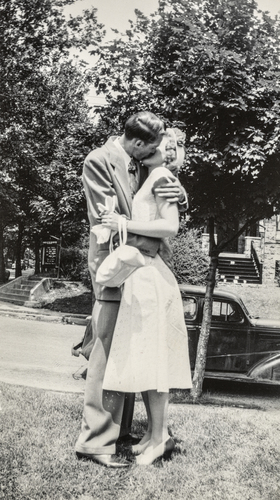 Alfred Eisenstaedt would have probably be awarded the Pulitizer Prize in 1945 for his Times Square photo were it not for Joe Rosenthal’s photo “Flag Raising on Iwo Jima” on Mt. Suribachi. Eisenstaedt’s photo was of the sailor kissing a nurse – “V-J Day in Times Square” a/k/a “V-J Day” a/k/a “The Kiss”. It remains one of the most recognizable photos ever taken. Maybe it’s foolish to even try to compete with these masters of photography, but it does not stop us from trying. DPI’s photo “The Kiss” (July 1948) might have been influenced by Eisenstaedt. This romantic couple’s smooch occurred nearly three years following Eisenstaedt’s photo which was published in Life. I have a sense that there might have been a connection to the church across the street (Episcopal Church of the Incarnation). We are left to wonder if the couple participated in a happy event at the church such as a wedding or a baptism. 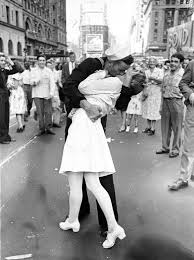